Chora Museum is one of the most important museums of Istanbul, attracting the attention of domestic and foreign tourists. Let’s see where the Chora museum is, how to get there, what the entrance fee is.

First of all, there is a constant circulation of visitors here. One of the reasons why the Museum is so popular among visitors is its history. Kariye Museum was used as a mosque after the conquest of Istanbul by Sultan Fatih in the Byzantine period.

Chora Museum 6 century. has a history going up. When it was designed and built as the first church, there were many buildings around it that formed a monastery complex. These structures could not be demolished in time.

It was built as a monastery in 534 during the reign of Justinian by St. Theodius. In the eleventh century, it was rebuilt by Maria Dukaine, Alexios I.’s mother-in-law. The monastery, which was damaged during the Latin invasion between 1204-1261, was restored by Teodor Metokhites in the 14th century. Exterior Narthex and Parekklesion were added to the monastery. He added Parekklesion for himself. The grave is now located at the entrance of the museum where a marble stone was identified.

It consists of Chora, Naos, two-storey annex building on the north side, Inner Narthex, Outer Narthex, and Parekklesion on the south side and five main architectural units. The main structure of the existing church is a shortened planned structure covered with a dome.

The dome is carried with four piers in the form of kiborion. High pulley. 16 tall windows allow plenty of sunlight to enter the interior. In the north, there is a high probability that the lower floor of the adjacent building is the treasury building and the upper floor is the library of Metokhites. 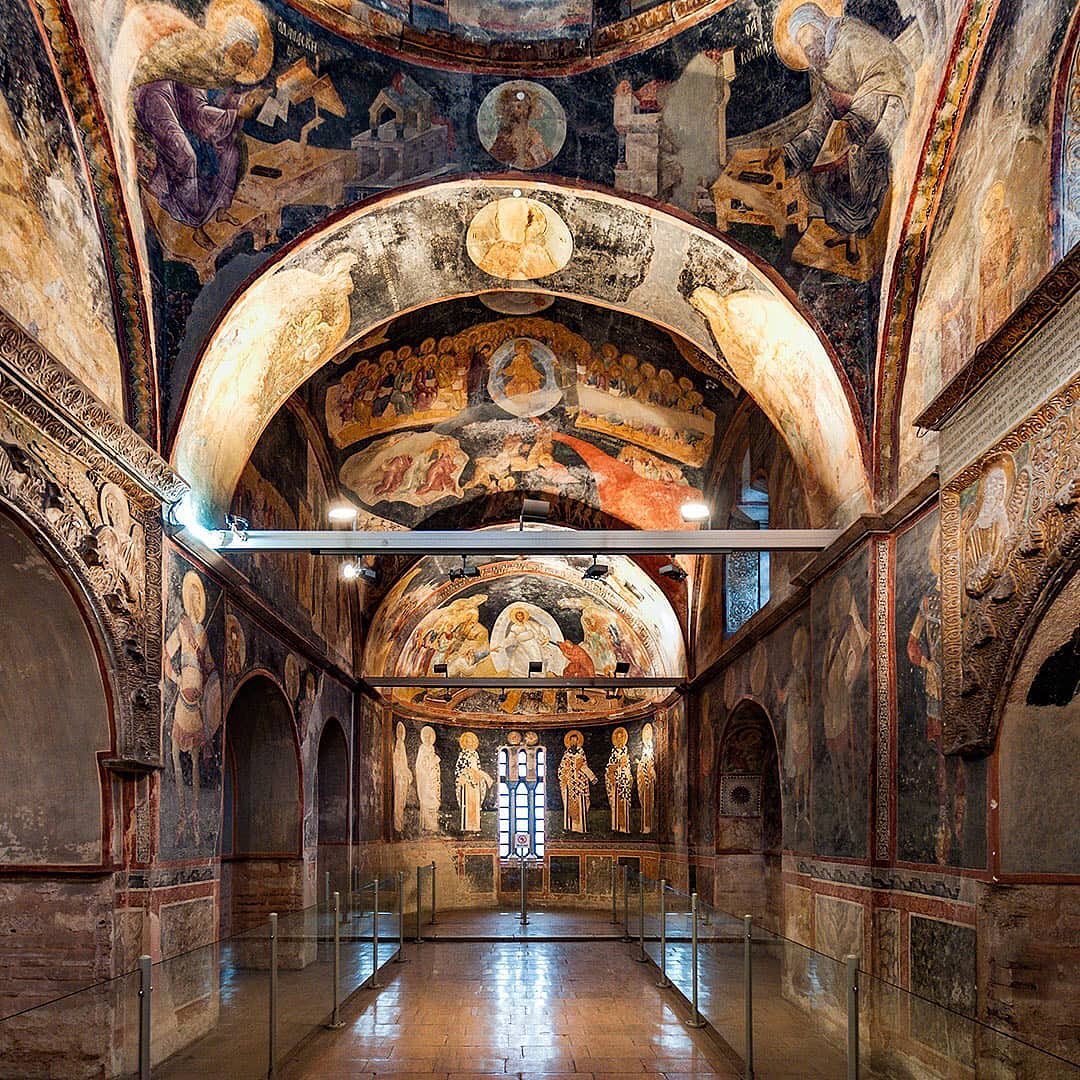 The minaret is located in the south-west part of the outer Narthex where the bell tower was located. The main place of the church (Naos) is 10.5 # 15 mt. in sizes. The main floor and walls are covered with marble. The white colored and gray-veined marbles were used extensively in the decoration of the chora. In addition, a rich appearance was obtained with porphyry, ancient green, onyx, red, yellow and pink colored marbles brought from different places such as North Africa, Egriboz Island and Afyon.

Although the marble workmanship in the career is as good as the marble work in Hagia Sophia, it does not stand out among the paintings made with rich mosaic and fresco techniques.

1296 ′ in the great earthquake. 58 years after the conquest of Istanbul by Fatih Sultan Mehmet in 1511, Sultan II. It was converted into a mosque by Atik Ali Pasha, one of the Grand Viziers of Beyazıd. In this transformation, mosaics and frescoes on the walls were covered with plaster. Only the minaret at the corner and the mihrab to the southeast are added to the structure as a mosque. The originality of the structure has been preserved. The surrounding houses were generally restored in the style of old Istanbul bay windows. Chora Hotel serves for domestic and foreign tourists who come to boarding. Dining options at this hotel include a meal. You can buy souvenirs or postcards from the shops around the museum. Those who are tired during the museum tour can relax and relax by drinking Turkish coffee in the tea garden opposite the museum

Where is Chora Museum

Chora museum is located in Edirnekapi, which is considered as the center of Istanbul, and transportation is very easy from all sides. As it is close to other museums and places in Istanbul, it participates in sightseeing programs very comfortably.

You can use Taksim – Edirnekapi bus line from Taksim side. You can use Selamicedid-Topkapi tram line while coming by Arnavutkoy-Besyuzevler.

When coming from the Asian side, you can use the means of transportation passing through the martyrdom. Transportation to Edinekapi from anywhere in Istanbul is easily provided. You can reach the Chora Museum with the signs on the street in Edirnekapi. 100 meters from the street. 50-60 mt inside the walls. bottom.

Note: The area is closed to vehicle traffic. For those arriving by car, there are parking areas before coming to the museum.

How to get to Fethiye Oludeniz Beach? / Mugla

Istanbul December 19, 2020
© Travel Gezilmesi Gereken Yerler 2012-2021. - Usability and images on this site can not be used without showing the source. "Name and Logo" of our site is our registered trademark.